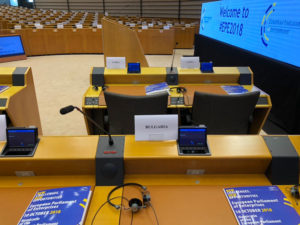 Rosen Daskalov participates in the fifth edition of the EUROPEAN PARLIAMENT OF ENTERPRISES 2018, which took place in Brussels on 10 October.

The owner of Sin Cars International made a statement on one of the topics by emphasizing the role of education as a prerequisite for acquiring skills, particularly the education in entrepreneurship from first grade – the basis for applying these skills in the best way. Another topic in his speech was the new initiative –  Road Safety  as a personal contribution and responsibility for fewer road accidents.

The project can be downloaded here: http://sincars.co.uk/road-safety-project/

EUROPEAN PARLIAMENT OF ENTERPRISES is organized by the Association of European Chambers of Commerce and Industry.