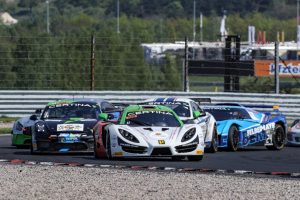 Third position in AM class for season finale 2017 for “Sofia Car Motorsport” in European GT4 series at Nuerburgring.

Ivan Vlachkov with SIN R1 GT4 had great performance during the whole competition and only seconds didn’t let him to have even better ranking in both races. In the first race he started from forth grid position in his class. He raced with very good pace all the time and in the end he fought for podium. But after collision at the last turn with one of the Maserati #77 in the last lap, Vlachkov didn’t manage to hold the third place and finished fourth in the final ranking.
The second race also started very well as the Bulgarian started form second grid position in AM class and lost the first place because of violation of the obligatory time in the box with half a second. (94.5 sec. instead of 95 sec.) which led to Stop-and- Go penalty. Thanks to the motivation of Ivan Vlachkov to fight till the end he made it to third podium position.
“It was a successful year, I would like to express my gratitude to the team, our families and all people who supported us.”Sofia Car Motorsport” and SIN CARS took their deserved place in the modern motor sport on a world level.” said after the end of the racing weekend Rosen Daskalov, team manager of “Sofia Car Motorsport” and creator of SIN R1 GT4.