Round 4 of the GT4 Central European Cup 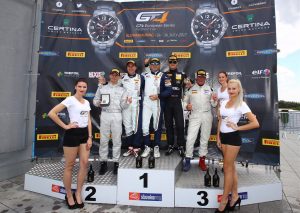 In Season 2017 again in the fourth round of the European GT4 Series, held in Slovakia, Sofia Car Motorsport welcomed Ivan Vlachkov, who made the team entirely Bulgarian. The young hope showed its potential in qualifying sessions and took the first place in the starting grid in the second race. Despite the competition and the fact that his first meeting with the car was only a few days earlier, Vlachkov masterfully fought and won the title in his class. Despite finishing second, following a penalty for the Maserati team, the Bulgarian pilot was ranked first.

Round 3 of the GT4 Central European Cup

Round 5 of the GT4 Central European Cup