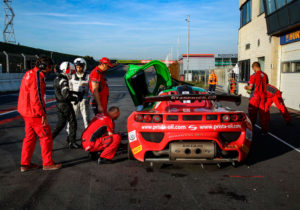 Ivan Vlachkov finished the season in the European GT4 Series with 4th place in the AM class.

In this round behind the wheel of our SIN R1 GT4 were the Bulgarian pilot Ivan Vlachkov with Silver category and Chris Chadwick with Bronze category. Chris competed for the Bulgarian team in 2016 at Hungaroring, finishing with podium position!

In the first race, the pilots finished 4th in AM class. At the start, Chadwick set off well ahead of one of his rivals in the class, heading fifth. He stayed there until the 27th minute after the start of the race when he was replaced by Vlachkov who immediately made the quickest lap of the race in the category.

Unfortunately a technical problem prevented Ivan Vlachkov from completing the second race. In the race Ivan started from second position in his class and kept it like this, being fifth in the overall. Fifteen minutes after the start of the race, however, the hub of a front left wheel broke and Ivan had to come back to the box and couldn’t continue the race. So he did not take points from this race and stayed in 4th place in the final standings for the season.

“I was very fast and I wanted to win and hear the Bulgarian anthem, but today we were not lucky,” said Vlachkov after the final. “Thank you Sofia Car Motorsport, Damascene Alba ASK, Nikolay Monchev, Stoyan Stoyanov and my family for the big support during the whole season.”